Collaboration With Margaret and Lolamouse

Don't you think that reality is overrated?  If so, today's "In  Tandem" is for you.  Instead of "getting real", Margaret and I thought we'd get a bit surreal on all of you.

Surrealism is a cultural movement that began in the early 1920's and is best known for its visual artworks and writings.  The aim was to "resolve the previously contradictory conditions of dream and reality."  Artists painted unnerving, illogical scenes with photographic precision, created strange creatures from everyday objects and developed painting techniques that allowed the unconscious to express itself (source).  Surrealist works often contained bewildering elements, non sequitur, and unexpected connections.

Surrealistic poetry can take several forms.  Margaret and I decided to try a collaboration based on an old parlour game called "Exquisite Corpse" in which a group of people each take a turn adding toa drawing or poem, some of which remains hidden until the end.  Here is a link if you'd like a more thorough history and explanation:  exquisite corpse

For our collaboration, I wrote two lines of poetry but sent only the second line to Margaret.  (In person, this would be accomplished by just folding over the paper to cover the first line.)  Having seen only my second line, Margaret wrote two more lines to develop the poem, sending only her second line back to me.  The poem went back and forth between us, each of us adding to the poem while only seeing part of what was written before.  The final result is a surrealist poem that contains not just our two individual voices but our collective voice.

Feed me with your words.
I am empty and hunger for
sustenance, an approving glance,
like a child in a candy store.

I want to taste your poetry in my mouth
suck the sweetness.  The lollipop
dissolves; your tongue has silenced,
leaving me sink, swim, or belly flop.

Instead, I float,
gaze at the pallid sun,
surrender addiction
to the abyss, pleasantly undone.

Words and images tumble, crash like meteors
then reassemble.  Meaning and metaphor
entwine, become a red balloon I release,
watch soar, disappear beyond the sandy shore. 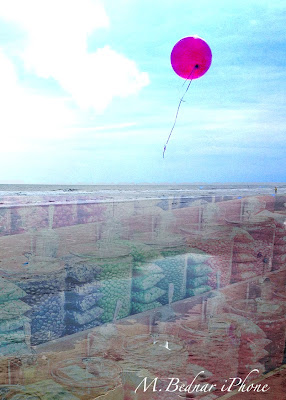 I think this is wonderful. What a wonderful way to collaborate