One, two, three four
Someone's knocking on the door
Five, six, seven, eight
Pounding hard; don't make him wait
Eight, seven, six, five
Pray to God that you survive
Four, three, two, one
Time is up; he found the gun. 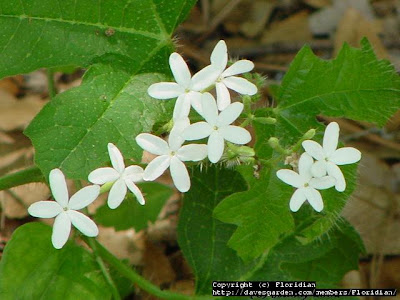 Pretty Penny, age of eight
Tread softly by the garden gate
Plucked a bloom though she'd been warned
Pricked her finger on a thorn
Crimson drops on petals fell
Heaven's milk turned wine of Hell
Sucked the blood so thick and red
Poisoned every word she said.

("Tread softly" is one of the common names of Cnidoscolus aconitifolius, also known as "finger rot" and "mala mujer." The plant has white flowers and is  almost completely covered with sharp spines, which can be irritating and painful to the skin.)

Aw! A blooming Gorey you are. Recall his alphabet of doom.

Love the title.........very apt! This was fun, if a little distressing towards the end (smiles).

Thanks for introducing me to a plant I will *never* have in my garden--the first one is great,too--love the creepy, and the title reminds me of my favorite Stephen King jump rope song:
'Late last night and the night before
Tommyknockers! Tommyknockers!
Knockin on the door...'

I meant 'Twilight,'not your own personal vampires, that is...when it comes to vampires, I believe in a woman's right to choose. ;_)

Okay, no planting aconite for me, either, although the frightening flowers are pretty.
Very nice response to the prompt, Ms Mouse.
K

well those are about as freaky as freddy kruegers nursery rhymes...

the second one though conveys a story so succint...its like a story of warning....very nice...

Shivers and panic you've sown in the garden!

Both of these jump-rope songs are chilling in their own way. I particularly liked the second one.

This is so awesome! To me, sing song meets creepy is always a perfect match.

A modern-day Sister Grimm! Yes, keep the vampires, kids today don't know what is scary! (The Omen still freaks me out)

Love your creepy songs...great take on the prompt!!

How very Edmund Gorey of you, Lola! At least you copped to the "creepy" right away. The one that ended with the gun hit me right in the gut.

The second was good as well, but it was more cerebral... but still it would work as a jumprope song. How sick is that?! Amy

The first one, the ending was unexpected, really good ~

The second one, dark verses "poisoned words" but very good ~

I love when I'm accidentally reminded of why I adore you and your writing!

Don't get here nearly as much as I'd like these days......life gets in the way......but it's always so wonderful to come back and visit here!

I love when I'm accidentally reminded of why I adore you and your writing!

Don't get here nearly as much as I'd like these days......life gets in the way......but it's always so wonderful to come back and visit here!